STEUBENVILLE — Thanks to the generosity of contributors, the hard work of the Ohio Valley’s steelworkers won’t be forgotten in the holiday Nutcracker Village.

Sandy Chapman and her husband and law partner, Patrick Casey, of the Wheeling law firm of Casey and Chapman donated $1,075, said retired steelworker Carmen DeStefano of Steubenville, which will cover the care and storage of the nutcracker.

DeStefano led a drive for the nutcracker.

When announcing the effort in December, DeStefano said he didn’t want the hard work of the immigrant steelworkers who came to the nation with very little, as well as those who fought for the unions in the mills and the families who benefited from that hard work, to be forgotten.

The message rang with Chapman, who said a story by now-retired Dave Gossett in the Dec. 27 edition helped prompt her to make the donation. She contacted Gossett, who got her in touch with DeStefano, she said.

“We read that fantastic article and thought it was a wonderful cause,” she said. “And, I’ve always found nutcrackers to be magical.”

She said the stories of the steelworkers reminded her of her family in her native Indiana, where there were hard-working people on farms and a distillery. She said her husband’s family worked in the coal mines in West Virginia.

DeStefano bought the nutcracker but said there needed to be money for its perpetual care and storage.

He said it was tremendous that Casey and Chapman stepped up with the contribution.

Fellow retired steelworker Frank Potenzini of Steubenville said, “We say thanks. Wow, it was amazing. And, how the Nutcracker Village took off is amazing.” 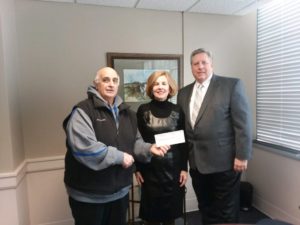