WHEELING, W.Va.- Attorneys Patrick S. Casey and Sandra M. Chapman, founding members of Casey & Chapman, PLLC, in Wheeling, WV, have been named to the “Lawyers & Leaders” class of 2019. The Lawyers & Leaders program is a partnership of the West Virginia University College of Law and the WV Executive designed to honor those who have dedicated themselves to serving and advocating for the rights of others. The partnership recognizes an elite group of remarkable lawyers who are selected based upon their positive impact on their communities, the state and the nation.

Gregory Bowman, dean of WVU College of Law, stated, “The individuals honored this year have demonstrated superb leadership, a strong commitment to service and a deep love of the state of West Virginia. We are so proud to honor them and celebrate their wonderful accomplishments.”

The members of the Lawyers & Leaders Class of 2019 were honored August 22 at the WVU College of Law. 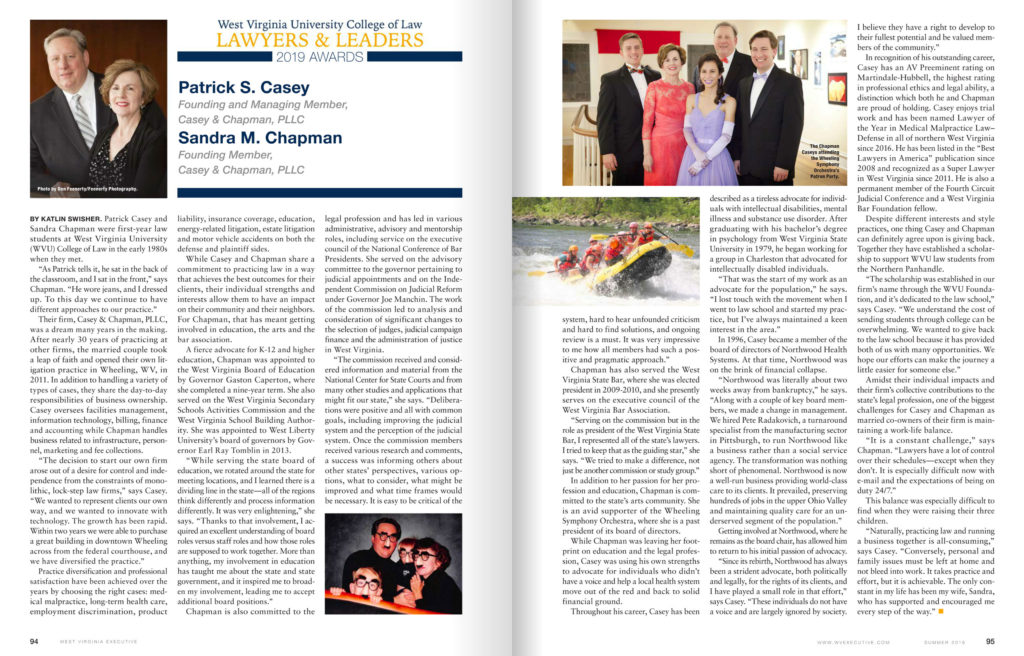 BY KATLIN SWISHER. Patrick Casey and Sandra Chapman were first-year law students at West Virginia University (WVU) College of Law in the early 1980s when they met.

“As Patrick tells it, he sat in the back of the classroom, and I sat in the front,” says Chapman. “He wore jeans, and I dressed up. To this day we continue to have different approaches to our practice.”

Their firm, Casey & Chapman, PLLC, was a dream many years in the making. After nearly 30 years of practicing at other firms, the married couple took a leap of faith and opened their own lit­igation practice in Wheeling, WV, in 2011. In addition to handling a variety of types of cases, they share the day-to-day responsibilities of business ownership. Casey oversees facilities management, information technology, billing, finance and accounting while Chapman handles business related to infrastructure, person­nel, marketing and fee collections.

“The decision to start our own firm arose out of a desire for control and inde­pendence from the constraints of mono­lithic, lock-step law firms,” says Casey. “We wanted to represent clients our own way, and we wanted to innovate with technology. The growth has been rapid. Within two years we were able to purchase a great building in downtown Wheeling across from the federal courthouse, and we have diversified the practice.”

While Casey and Chapman share a commitment to practicing law in a way that achieves the best outcomes for their clients, their individual strengths and interests allow them to have an impact on their community and their neighbors. For Chapman, that has meant getting involved in education, the arts and the bar association.

“While serving the state board of education, we rotated around the state for meeting locations, and I learned there is a dividing line in the state-all of the regions think differently and process information differently. It was very enlightening,” she says. “Thanks to that involvement, I ac­quired an excellent understanding of board roles versus staff roles and how those roles are supposed to work together. More than anything, my involvement in education has taught me about the state and state government, and it inspired me to broad­en my involvement, leading me to accept additional board positions.”

Chapman is also committed to the legal profession and has led in various administrative, advisory and mentorship roles, including service on the executive council of the National Conference of Bar Presidents. She served on the advisory committee to the governor pertaining to judicial appointments and on the Inde­pendent Commission on Judicial Reform under Governor Joe Manchin. The work of the commission led to analysis and consideration of significant changes to the selection of judges, judicial campaign finance and the administration of justice in West Virginia.

“The commission received and consid­ered information and material from the National Center for State Courts and from many other studies and applications that might fit our state,” she says. “Delibera­tions were positive and all with common goals, including improving the judicial system and the perception of the judicial system. Once the commission members received various research and comments, a success was informing others about other states’ perspectives, various op­tions, what to consider, what might be improved and what time frames would be necessary. It is easy to be critical of the system, hard to hear unfounded criticism and hard to find solutions, and ongoing review is a must. It was very impressive to me how all members had such a pos­itive and pragmatic approach.”

“Serving on the commission but in the role as president of the West Virginia State Bar, I represented all of the state’s lawyers. I tried to keep that as the guiding star,” she says. “We tried to make a difference, not just be another commission or study group.”

In addition to her passion for her pro­fession and education, Chapman is com­mitted to the state’s arts community. She is an avid supporter of the Wheeling Symphony Orchestra, where she is a past president of its board of directors.

While Chapman was leaving her foot­print on education and the legal profes­sion, Casey was using his own strengths to advocate for individuals who didn’t have a voice and help a local health system move out of the red and back to solid financial ground.

Throughout his career, Casey has been described as a tireless advocate for individ­uals with intellectual disabilities, mental illness and substance use disorder. After graduating with his bachelor’s degree in psychology from West Virginia State University in 1979, he began working for a group in Charleston that advocated for intellectually disabled individuals.

“That was the start of my work as an advocate for the population,” he says. “I lost touch with the movement when I went to law school and started my prac­tice, but I’ve always maintained a keen interest in the area.”

In 1996, Casey became a member of the board of directors of Northwood Health Systems. At that time, Northwood was on the brink of financial collapse.

“Northwood was literally about two weeks away from bankruptcy,” he says. “Along with a couple of key board mem­bers, we made a change in management. We hired Pete Radakovich, a turnaround specialist from the manufacturing sector in Pittsburgh, to run Northwood like a business rather than a social service agency. The transformation was nothing short of phenomenal. Northwood is now a well-run business providing world-class care to its clients. It prevailed, preserving hundreds of jobs in the upper Ohio Valley and maintaining quality care for an un­derserved segment of the population.”

Getting involved at Northwood, where he remains as the board chair, has allowed him to return to his initial passion of advocacy.

“Since its rebirth, Northwood has always been a strident advocate, both politically and legally, for the rights of its clients, and I have played a small role in that effort,” says Casey. “These individuals do not have a voice and are largely ignored by society. I believe they have a right to develop to their fullest potential and be valued mem­bers of the community.”

In recognition of his outstanding career, Casey has an AV Preeminent rating on Martindale-Hubbell, the highest rating in professional ethics and legal ability, a distinction which both he and Chapman are proud of holding. Casey enjoys trial work and has been named Lawyer of the Year in Medical Malpractice Law­Defense in all of northern West Virginia since 2016. He has been listed in the “Best Lawyers in America” publication since 2008 and recognized as a Super Lawyer in West Virginia since 2011. He is also a permanent member of the Fourth Circuit Judicial Conference and a West Virginia Bar Foundation fellow.

Despite different interests and style practices, one thing Casey and Chapman can definitely agree upon is giving back. Together they have established a scholar­ship to support WVU law students from the Northern Panhandle.

“The scholarship was established in our firm’s name through the WVU Founda­tion, and it’s dedicated to the law school,” says Casey. “We understand the cost of sending students through college can be overwhelming. We wanted to give back to the law school because it has provided both of us with many opportunities. We hope our efforts can make the journey a little easier for someone else.”

Amidst their individual impacts and their firm’s collective contributions to the state’s legal profession, one of the biggest challenges for Casey and Chapman as married co-owners of their firm is main­taining a work-life balance.

“It is a constant challenge,” says Chapman. “Lawyers have a lot of control over their schedules-except when they don’t. It is especially difficult now with e-mail and the expectations of being on duty 24/7.”

This balance was especially difficult to find when they were raising their three children.

“Naturally, practicing law and running a business together is all-consuming,” says Casey. “Conversely, personal and family issues must be left at home and not bleed into work. It takes practice and effort, but it is achievable. The only con­stant in my life has been my wife, Sandra, who has supported and encouraged me every step of the way.”